A Mother’s Reckoning: Living in the Aftermath of Tragedy 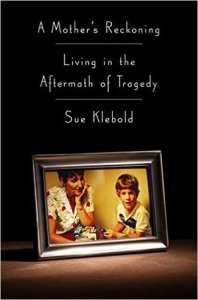 On 20 April 1999, I was (almost) 24 years old. I’d been out of college and working for a year and half, having moved away from my native state of Colorado, officially leaving the nest. (We moved back about a year later.) Looking back, I was only 6 years older than Dylan Klebold. Dylan was one of the two shooters that marched into Columbine High School on that day and began killing his classmates.

Fast forward 17 years. Now I’m a mother of two boys. And over these last 17 years, school shootings just keep happening. And my question has morphed from how to why. Why didn’t the parents know what was happening? Because as a mother, I need the answer to this question. Instead of the blame game, we need to learn from others.

Ms. Klebold does her best to honestly answer this question.

The book starts out on that fateful day, with Ms. Klebold receiving a panicked call from her husband – something is happening at Dylan’s school. Instead of presenting a chronological order of facts, she tells the story in the way it developed for her. Worry that Dylan might be hurt. The realization that he is not a victim, but the shooter.  Her six months of grief from the initial 24 hours to the final police presentation of evidence that proved that Dylan was an active, willing planner and participant. And finally Ms. Klebold’s journey to try and figure out what had changed. When had her sweet little boy turned into a cold blooded killer?

Of course there’s not a cut and dry answer to this question. Dylan was depressed, but he hid it well from his family. His depression and desire to die mixed with his friendship with psychopath Eric Harris fueled the massacre. Ms. Klebold points out that it wasn’t only a mass murder. It was a mass murder-suicide. Dylan wanted to die. I remember reading in Dave Cullen’s Columbine that the combination of a depressed person and a psychopath causes each personality to feed off of the other, in this case with horrific results.

The first part of the book looks at Ms. Klebold coming to terms with who her son really was, and second part of the book deals with what she terms as “brain health.” Dylan was very good at hiding his depression from his family. They thought he was a typical teenager, going through the regular ups and downs of adolescence. Dylan was adept at initially hiding his true sadness and anguish from them, and later his plans for his final act of destruction. She points out things she wishes she would have done differently in the hopes that it will help other parents to see the signs of what their children could be hiding.

We all know the story of Columbine. At least, we do here in Colorado. But Ms. Klebold gives us a unique insight as the parent of one of the shooters. Her anguish and regret is apparent throughout the book. If she could go back and change things, she surely would. Instead, she is honest in her story with the hope that another parent can help their child in a way that she could not.

“One thing is certain: when we can do a better job of helping people before their lives are in crisis, the world will become safer for all of us.”

As a final note, I would like to point out that Ms. Klebold is donating all author profits from this book to “research and to charitable organizations focusing on mental health issues.”

In February 2016, Ms. Klebold met with Diane Sawyer for her first interview, the link is provided as an additional resource.

4 thoughts on “A Mother’s Reckoning”

Hello July! Can you believe it? Half the year, already over. How are those #readinggoals coming along? I’m currently reading Good Girl, Bad Blood by Holly Jackson, and hoping to get to all these other books this month. I’m much better with audiobooks, so we’ll see how I do with these. Loving my #alwaysfullybookedplanner by @littleinklingsdesign as always!
5 Stairs to I Kissed Shara Wheeler by @casey.mcquiston . One of my two favorite reads of June!
5 Stairs to Framed in Fire by @itwhishaw Iona Whishaw. As always, I loved the latest book in the Lane Winslow mystery series. One of two absolute favorite reads in June!
4.5 Stairs to The Woman in the Library by @sularigentill This book was a story within a story, which was unexpected and so interesting! The heart of this book is a locked room-type mystery; there's a scream in the library and later a woman turns up dead - how did she get there? We follow the budding friendships of four strangers as they try to crack the case. And that's all I will say to avoid spoilers. :)