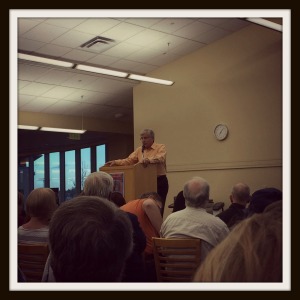 Last night, author Steve Berry was in town promoting The Patriot Threat, his tenth Cotton Malone novel (one of my Favorite Series). He had a talk and book signing at a local library. Prior to last night, I’ve been to two book signings. They were each a themed event that I was attending where an author happened to be there. Last night is the first time I’ve been to see an author I love, in person. It was so cool.

Steve Berry writes the wonderful Cotton Malone series (I’ve read them all!) – thrillers deeply seeped in historical events (with a twist, of course), typically in an international setting. He also has a few non-Cotton Malone books which are on my to-read list. Cotton’s world is exciting, and the historical element always makes for an enjoyable read. Mr. Berry takes real historical events, meetings, people, and weaves them into the story with just a little spin to create the plot.

The audience got to listen to Mr. Berry speak for a little over an hour. He is a wonderful speaker – very funny. He has a bit of a Georgian drawl which makes you want to sit down, drink some sweet tea, and just listen to a story. He started out for about 20 minutes talking to us about the history he’s using in the Patriot Threat (the 16th Amendment) and the setting of the book. (It sounds fantastic!) The remainder was an audience Q&A.

Afterwards, he had a book signing. He was so generous with his time, answering people’s questions and taking pictures. There was a man a few people in front of me who had a copy of every book he had written – and Mr. Berry smiled and signed every single one. After he signed my book, I asked him to sign a second book for my mom. I explained that she was watching my boys for me so I could attend. He signed her book “Thanks for babysitting!” I took his picture while he was signing and Mr. Berry asked if I would like one with him, which was so sweet – I wasn’t going to ask, but of course I took the opportunity he gave me. Great author, and a great person.

I did not take any notes or recordings during the session, but here are some highlights that I remember. The one that really sticks out in my mind is this piece of advice he had:

(When you’re trying to get a photo for your #bookstagram and your dog just wants to play with the basketball…)
Hello September! Fall is officially just a few weeks away…what are you planning on reading this month? I’m hoping to get to a few of these beauties! #bookstagram #fallreading #bookcover #september2021reads #whatareyoureading #whatamireading #whatiamreading
Was out running an errand this afternoon and my husband and I stopped in at the @suddenfictionbooks shop. I cannot believe they have been open for two years and this is the first time I made it in. It’s amazing, a great mix of new and used books to pick from; the two used books I picked up are in great condition. My favorite part was hearing the owner Gina give book recommendations to her customers. She is *really* knowledgeable (and also I think we have very similar tastes in books)! I can’t wait to go back. #bookstagram #bookcovers #bookhaul #augustreads #independentbookstore #shoplocal #books
I had a great #bookmail week with two more surprise #betweenthechapters picks from @kensingtonbooks . So excited to read #AfterFrancesco , it’s been on my TBR list and sounds like a beautiful story about loss and survival. Love the cover of #BreakingBadger and it sounds like a fun paranormal romance! Thank you Kensington! #bookstagram #bookcovers