Chase Darkness with Me: How One True-Crime Writer Started Solving Mysteries 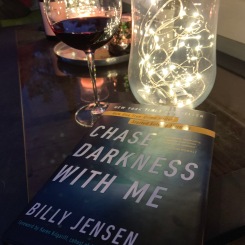 I have been on a true crime kick this year. A HUGE true crime kick. I thought I’d kicked the habit (obsession?) many years ago when cable network A&E moved from constant true crime programming (City Confidential was my favorite; watch it if you ever catch in in reruns – the original narrator Paul Winfield was just fantastic) to reality shows. I can sit and watch true crime all day, but only a few episodes of reality television. I’d see a true crime documentary here or there, but I kept it under control. And then about two years ago or so ago we got Neflix.

Netflix is a goldmine of true crime documentaries. I started slowly making my way through series like How to Make a Murderer and The Staircase. As I started to run low on Netflix material, two things happened to really reignite my true crime passion. I listened to the audio book I’ll Be Gone in the Dark: One Woman’s Obsessive Search for the Golden State Killer in February, and in March my sister-in-law introduced me to the My Favorite Murder podcast. I’ve been down the true-crime rabbit hole ever since.

As a mystery lover, I have always been drawn to true crime. While the majority of true crime stories themselves are senseless and tragic, ultimately I love to see when the crime is solved and justice prevails. I like to know that the bad guys don’t get away.

But sometimes (often) you run across a case without that satisfaction. The case has gone cold, and the family is left wondering exactly what happened to their loved one. I feel a pull towards those cold cases that are sitting on a shelf, collecting dust, waiting for the right clue to come along.

And so does Billy Jensen.

Whenever people ask me why I only write about unsolved murders, I always say the same thing: because I hate the guy who got away with it. But after Michelle [McNamara] died, it was different. Now I hate the perpetrator for taking over the lives of the living just as much as taking the lives of the dead. The victim’s families. The investigators. The volunteers. They all gave up giant chunks of their own lives to search for an answer that someone selfishly kept hidden away.

Chase Darkness with Me by Billy Jensen

I became aware of Billy Jensen when I started listening to My Favorite Murder. Billy is an investigative journalist, and as it turns out one of the writers who helped finish his friend Michelle McNamara’s book on the search for the Golden State Killer. At the beginning of April 2019, Billy Jensen and retired investigator Paul Holes released their first episode of their new podcast The Murder Squad, in which they have weekly assignments for listeners in the hope that they can uncover new leads in various unsolved cases. I’ve listened faithfully each week since day one, and of course bought Billy’s book when it released this fall.

(Also I should probably state here, I do not mean any disrespect to the author by referring to him informally in this review. I’ve tried writing “Mr. Jensen” as I type but I just can’t do it. Listening to the podcast for so many months, he and Paul feel so familiar that I find I can’t call him anything but “Billy.”)

Chase Darkness With Me is both a memoir and a true-crime story collection, as well as a bit of a how-to guide for the armchair detective. We learn how Billy became interested in true crime, his early journalism career, and how he started reporting unsolved and missing persons cases. We also see how Ms. McNamara’s sudden death helped fuel his passion to pursue justice by applying new technology and tools to those cases previously thought as unsolvable. 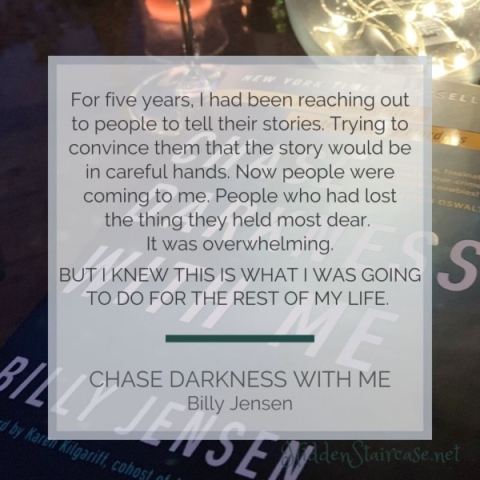 Almost every chapter features a different crime from Billy’s career. Some are solved, giving the reader the feeling of justice, but many remain unsolved. I think the most interesting piece of this novel is his idea for crowdsourced crime solving. Taking video surveillance from a cold case and getting it out to a targeted audience who might be able to identify the culprit.

Billy also uses his book to finish telling the story that began in Ms. McNamara’s book I’ll be Gone in the Dark with her investigation into the Golden State Killer. After Billy helped organize and finish Ms. McNamara’s book, it was published posthumously in late February 2018. In late April 2018, the police arrested the man suspected of being the Golden State Killer. Which all happened as Billy was writing this book, giving us the justice that both Billy and Michelle were seeking.

What makes Chase Darkness With Me such a great read isn’t the cases. Don’t get me wrong – the cases are interesting. It’s that Billy cares so much about these cases. His empathy for the victims and their loved ones comes through on every page. He has made finding justice for those left without it his relentless pursuit. He’s chasing darkness, and he takes the reader with him.

One thought on “Chase Darkness with Me.”

I brought a stack of books with me on my vacation last week, and Double Wide by @gretchenarcherauthor was the first one I picked up. 5/5 Stairs! This is one of my favorite series, and it’s always a pleasure to dive into Davis Way’s latest adventure. This is the 10th in the series, but written completely differently from Ms. Archer’s usual style. Plot-wise, I don’t want to give much away - Super-spy Davis Way is kidnapped with two other women while on one of her many outings doubling as Bianca Sanders, the wife of the Belissimo Resort and Casino owner. The narrative flows through a series of letters, emails, and newspaper articles. Usually the Davis Way mysteries are told just through Davis’ perspective - it was fun to get her perspective through letters to her husband Bradley, and also have other character’s voices pick up the tale in their hunt for the three kidnapped women. I think my favorite secondary voice was the emails from Baylor, I loved getting more insight into his character and thought process. As you read, it really does feel like several people authored this book, the writing style is so different between all the characters. It took me a bit to get used to the unusual format, but once I did it was a fun ride! There is a lot going on, and everything comes together beautifully. As always, Double Wide is full of humor, a few hijinks, and lots of heart.
5/5 Stairs for Never Never Quit by @karenhallionart Karen Hallion is one of my favorite artists, and I was so excited to be a backer for her Kickstarter to launch her children’s book “Never Never Quit.” Meet Celara, a girl with a big imagination and a love of drawing. This story is inspiring with its message to keep going when you face challenges, the art is beautiful, and a terrific addition to any child’s library.
Welcome to July! I love a good paperback to read outside in the summer months, and I have so many great books to pick from! A lot of fun #romcombooks in this pile. What are you reading this month?
5/5 Stairs to Norse Mythology by @neilhimself Narrated by the author, Neil Gaiman did a fantastic job immersing me into the world of the Nordic gods. His retelling of these classic myths were engaging and written for today’s audience, and will keep these tales alive for future generations. Highly recommend listening to the audio for this one!