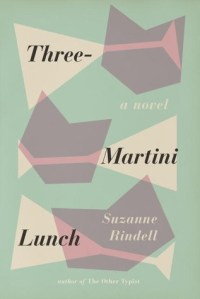 Here’s what drew me to this book. To be honest – it was the title. I love to have the occasional martini lunch with my husband when we’re off from work. (But three martinis? I’d be flat on the floor.) Naturally with a title like that I had to read the book description. 1958. Greenwich Village, New York. The world of publishing. Of course, I immediately thought, this sounds a lot like the TV show Mad Men. I was sold.

Now I will tell you, for me this book was a lot like Mad Men, but not in the way you might think. When I first saw the ads for this brand new original TV series coming to AMC, I thought, this show looks great. A fun, light-hearted show set in the mad world of 1960’s advertising. And sometimes it was. But after watching the first few episodes, I found it was also a very serious show, with tough topics and situations thrown into this crazy world of advertising.

Three Martini Lunch was the same way. I was expecting more of a light-hearted journey of these three young people and how they made it (or didn’t) in the world of publishing in the late 1950’s. I got that and much more. Three Martini Lunch follows three people – Cliff, Eden, and Miles. The narrative perspective switches back and forth between these three throughout the story.

Cliff comes from a privileged background, and has decided to stick it to his wealthy family and prove he’s got what it takes to be a writer by dropping out of college. Eden, fresh off the bus from Indiana, is determined to make it as an editor, but she’s got a tough road ahead in this town – she’s a woman and she’s Jewish. Miles is finishing up his degree at Columbia, but isn’t sure where he’s headed after that. As a young black man from Harlem, he realizes he has a true internal struggle with his family’s image of him, versus what he may want for himself.

In the end, I feel like Three Martini Lunch is a book about the decisions we make in life to make our place in this world, and the consequences they have. Minor decisions become life-changing events. One man’s triumphs can become another man’s heartaches. Three Martini Lunch follows these three characters and how this one moment in time molded the outcome of the rest of their lives.

I couldn’t pick just one quote for this post, there were so many great ones, so I settled on four. Each of these comes from a different character:

Click on the image to bring up a larger version. 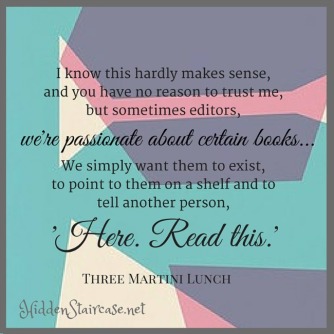 Many thanks to First to Read for providing me with a free copy of this book in exchange for an honest review.

We’ve got a cold and dreary day while our latest snow storm moves in. Perfect for cuddling up with a good read. #bookstagram #springtimeincolorado #dogsandbooks #whatareyoureading
Current (reading) situation. My lap isn’t big enough, but where there’s a will, there’s a way. #readchristie2021 #dogsandbooks #doglife #bookstagram
I got my first audiobook from #netgalley ! I love #truecrime and #deathonoceanboulevard is right up my alley, as author Caitlin Rother investigates the mysterious 2011 death of Rebecca Zaharia. About two hours in; enjoying it so far!
So excited to get #wildwomenandtheblues from @kensingtonbooks ! How gorgeous is this cover?! I love that it’s #historicalfiction with a dual timeline. Really looking forward to reading this #betweenthechapters pick!