Death of a Ghost

I always look forward to the release of a new Hamish Macbeth mystery each year. In fact, Hamish is probably my favorite cozy mystery series. The small town of Lochdubh in northern Scotland provides a perfect setting for the lazy policeman who wants nothing more than to look after his beat while raising a few sheep and sharing a day fishing with his pets.

A little background for those unfamiliar with Hamish Macbeth 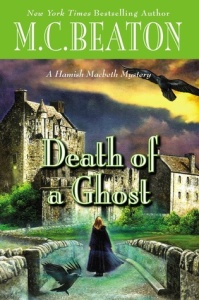 ow I have to admit, Hamish books are…comfortable. While the mystery is different in each one, there are certain things a regular reader anticipates in each book. I know I do complain about these things in the Stephanie Plum series, because it just feels like Ms. Evanovich is recycling the first seven books of the series with a different cover with each new release.

With Hamish, it feels different. There are things in addition to the mystery that I’ve come to expect. It’s like eating your favorite comfort food that your mom used to make when you were little. The recipe you make is a little different, but those subtleties that you love are still there.

Of course, the mystery is always unique to each book.

To further spice things up, Ms. Beaton always adds new layers to the village of Lochdubh and Hamish. He’s been through multiple work partners over the years; Hamish prefers to work alone and usually finds a way to help his partner move on to another occupation.  The mystery is always fresh. Hamish’s complicated relationships with Priscilla and Elspeth seem to have quieted down in the last few books, leaving him open to new experiences (and less pining).

Death of a Ghost

This latest Macbeth mystery is what I’ve come to expect from Ms. Beaton – a cozy mystery full of familiar characters and wit. Hamish and his constable, Charlie, are invited to spend the night at an old castle in the hopes to catch a ghost (most likely the wind) and end up with a dead body of unknown origin instead. Which promptly goes missing.

As always, my favorite part is getting to spend time in Lochdubh. The majority of Death of a Ghost is centered nearby in a neighboring village on Hamish’s beat. We get to catch up with a few familiar faces from previous outings, but I could have used more time with the villagers for sure. I also used to really like the character of Jimmy and his off-the-record talks with Hamish, but in this book he is starting to feel a bit like Blair instead.

While new readers won’t necessarily know the backstory of Hamish and his relations with various characters, they should have no problem picking this book up and enjoying the characters and the mystery. For those of you familiar with Lochdubh, it’s another fun outing with Hamish. 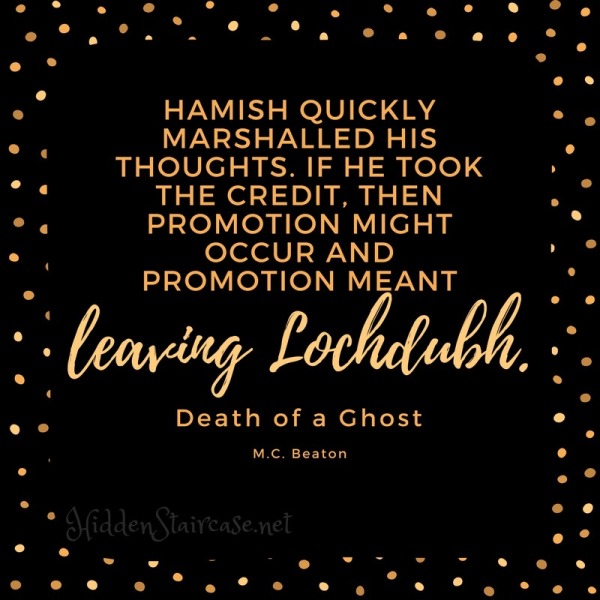 Many thanks to NetGalley for providing me with an advance copy of this book in exchange for an honest review.

5 thoughts on “Death of a Ghost. Great to be back in Lochdubh.”

I’m about 1/3 of the way through, and really enjoying the December #readchristie2021 selection (The Sittaford Mystery). As you can see, this morning my dog really enjoyed it also.
Hello December! As always at this time of year, I’m running a bit behind and playing catch-up. Not sure what I’m reading this month, but I’m planning to read a few of the Christmas Mysteries in this BIG (ginormous!) book for sure!
I love exploring used bookstores. Picked up a couple of great finds the other day at the Downtown Books & News store in Asheville! Excited to add this version of The Hidden Staircase to my collection. (Same cover as the book passed down to me, but this reprint has a different text version with only 20 chapters versus the 25 in my copy.)
Best wishes and warmest regards to November! What’s on your reading list this month? These are all books I’ve recently acquired and I’m excited to read them all. Right now I’m listening to @hayleymills_official Forever Young audiobook (narrated by the lovely actress herself) and loving it!