This week we are looking to the future! In the form of books being released in the first half of 2016. Three confessions to make here.

I’m sure there are tons of books out there with a release date of somewhere in between January and June 2016 that will be fabulous, wonderful reads. I just don’t know about them yet. Thus, my list primarily consists of series I enjoy and I want to read the next installment.

I can’t wait to see other TTT lists this week to find out what I am missing! I know you all will have great recommendations for me.

Top  Seven Most Anticipated Releases For The First Half of 2016 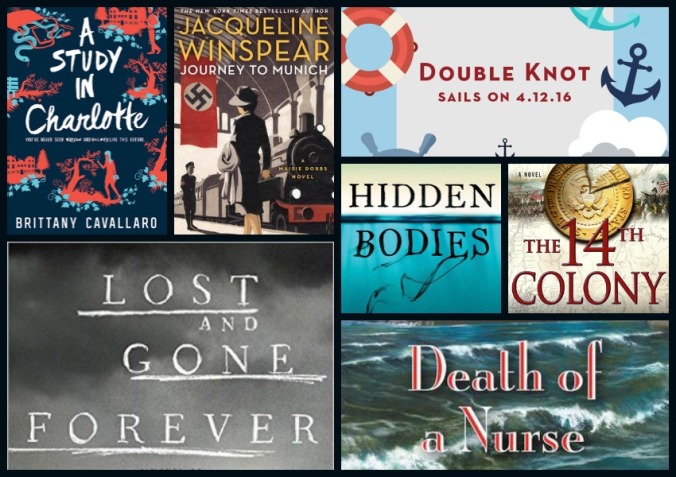 Death of a Nurse by M.C. Beaton

A Study in Charlotte by Brittany Cavallaro

Journey to Munich by Jacqueline Winspear

The 14th Colony by Steve Berry

So…what did I miss? Don’t be shy! I know there are a ton of wonderful reads just waiting for me out there. Comment below, and link up to your own TTT if you’ve got one.

Just starting A Lesson in Vengeance by @sosaidvictoria … Just a few chapters in, but I can already tell this is a perfect October read. Boarding school. Witches. Mysterious death. Possible haunted house.
The last few years I’ve tried using a reading planner. I would start out pretty good, but then quit using it after a few weeks. Then this year I tried the #alwaysfullybooked planner. Oh my gosh. This planner is gorgeous and packed with so many great sections and fun page layouts like reading challenges and quote spreads. @littleinklingsdesign has done an amazing job with the design. The best part is I’ve done a pretty good job keeping up with it. I’m not a super user by any means, but I’ve been consistent. :)
Hello October! I don’t really have any books on my reading list yet this month; I pulled these off of my shelves as some possibilites. What are you reading? #octoberreads #octoberreading #fall #fallvibes #bookstagram #october2021 #memoir #mystery #youngadultbooks #youngadult #alwaysfullybooked
(When you’re trying to get a photo for your #bookstagram and your dog just wants to play with the basketball…)