I just recently finished reading the latest book in the Jack Reacher series by Lee Child. Since this is my first Jack Reacher book review at Hidden Staircase, I started to write a little introduction to the series. As I started (and kept) writing, I realized this really should be a post in itself. So here you go.

I first met Jack Reacher in 2005. I was browsing the library shelves and the simplicity of the One Shot cover called out to me. 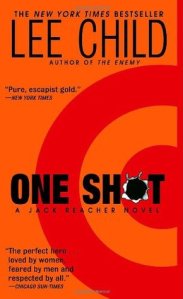 One Shot (the ninth book in the series) sucked me right it. It was fast paced and full of action, appealing to my sense of justice. After finishing, I went back and started at the beginning with Killing Floor. Reacher soon became one of my favorite series to read. Mr. Child puts out a new Reacher adventure each year, and I never miss them.

What makes them so great?

6’5″ ex-Army Jack Reacher is a nomad. He has the clothes on his back, with a passport and a toothbrush tucked into his pocket. Frequently hitchhiking, Reacher wanders around the United States from town to town. Sometimes he finds himself in a big city, other times a small town out in the middle of nowhere. Sometimes it’s personal, others just a desire for the truth. Inevitably, he finds that he has wandered into some kind trouble.

Reacher isn’t afraid of a fight, and trouble always comes looking for him. Instead of simply writing the fight scene, Mr. Child uses a unique concept – Reacher always thinks through the moves and timing first in his head, anticipating his opponents actions and reactions split seconds before they occur (often using basic physics principles to back his numbers up). It makes the fight scenes pretty interesting to read.

My husband is surprised I enjoy the series so much; it can be pretty violent. Reacher appeals to my sense of justice. Every book sucks me in, pretty much from page one. I know I’m in for a fun ride the second I pick up the book from the library.

I love Mr. Child’s writing style, particularly when the books are written in third person. (I recall that some are written in first person). Reacher’s wit and dry sense of humor resonate with me.

I would venture to say that in every book you’ll find that Reacher:

At the writing of this post, I’m 20 books into the series. While it’s true that each book has some common elements, Mr. Child does a great job at making each book unique. Every book is full of action, and Reacher always finds himself trying to get to the bottom of a mystery. The early books in the series and 61 Hours have been my favorites.

And before you ask – yes, I know there is a film version (based on One Shot). No, I haven’t seen it. And I have no plans to. Nor the follow up movie coming out next year. After 20 books, I like the image of Reacher I have in my head, which is the opposite of Tom Cruise.

I’ll stick to the books, thanks.