The Book of Speculation

I remember seeing this cover earlier this summer. It intrigued me, as did the description of the book. When I was at the library a few weeks ago and the audio book was available, I picked it up. This book was very different from what I was expecting, based on the cover.

Simon Watson receives an old book in the mail, from an unknown bookseller who specializes in used and antiquarian books. The note reads:

Dear Mr. Watson,
I came across this book at auction as part of a larger lot I purchased on speculation. The damage renders it useless to me, but a name inside it – Verona Bonn – led me to believe it might be of interest to you or your family. It’s a lovely book, and I hope that it finds a good home with you.

The book turns out to be an accounting book for Peabody’s Portable Magic and Miracles, a traveling show. Simon is curious as to why his grandmother, Verona Bonn, is mentioned on one of the last pages, and begins digging.

As Simon attempts to connect this book to his family, his own life is crumbling around him – literally. His house is on the brink of sliding off the cliff into the sea. As if that weren’t enough to worry about, his job is at risk for layoffs, and his sister (visiting home for the first time in six years) is not herself. The more Simon learns, the more he realizes that something is very wrong with his family.

Two narratives run throughout the book, switching alternatively. The first is Simon’s first person narrative. The second is a third person account of Peabody’s traveling show, set in the late 18th century. The tale weaves back and forth, and the further you read you begin to see the threads of Peabody’s long ago menagerie in Simon’s life.

This book pulled me right in. As far as the audio book goes, I really loved listening to the narrator, Ari Fliakos. He was fantastic. Ms. Swyler’s writing is lovely. She does an excellent job telling the two stories simultaneously, with Simon’s discoveries and revelations fitting right in with Peabody’s traveling show history. Her characters were intriguing, and a week later I am still thinking about them. I love the connections she made between the past and the present.

The Book of Speculation was not exactly what I was expecting. Turns out, it was even better. 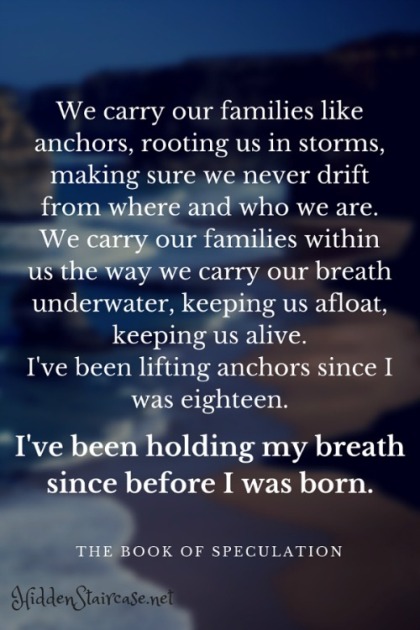 9 thoughts on “The Book of Speculation”

How cute are these Merry Gnomemas Planner stickers I got from @mom.always.plans ? I can’t wait to use them in December! And of course I love all the other stickers I got too. Makes weekly planning so fun!
4/5 Stairs to Hollow written by Shannon Watters and Branden Boyer-White, Illustrated by Berenice Nelle.
So excited for all three of these new releases, they all got shelves today! All are memoirs but each book is so different. Can’t wait to read each one of these; I admire each of these authors so much.
Just started The Villa by @ladyhawkins (Thanks @netgalley and @macmillan.audio ! Expected Publication 3 January 2023)